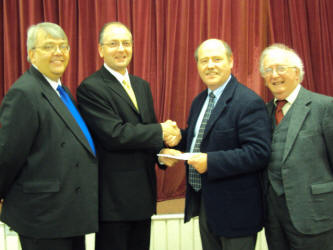 Neath’s newest mixed-choir, Neath Polyphonic Choir have donated all the proceeds from their inaugural concert to charity. On Thursday 14th October 2010, their Music Director, Mark Ritzmann handed over a cheque for £1,172 to Christian Aid representative Tom Defis at a Neath Churches Together event at Orchard Place Baptist Church. The generous contribution from the Choir enabled a total of over £14,000 to be raised for Christian Aid by the people of Neath. Mr.Defis thanked and commended the Choir for their sterling work, and said that all the money raised would be well utilised by Christian Aid for their work, particularly in the fight against poverty.

Neath Polyphonic Choir was formed in February this year and their first concert in July was enthusiastically received by an audience of over 200, who gave the Choir a standing ovation. Their next event will be a Christmas Concert at St.David’s Church on Friday 10th December 2010 at 7pm, when they hope to duplicate their success. Choir Director, Mark Ritzmann, said, ‘Our aim is not to take ourselves too seriously, but to enjoy singing some of the most wonderful music, to the best of our ability, in a friendly environment, and to share that music with others. We would always welcome new members to our choir practices at Neath Welsh School on Wednesdays at 7pm, and we always have a lot of fun at rehearsals’.

Neath’s newest mixed-voice choir, Neath Polyphonic Choir were on top form at their recent concert as part of Neath Festival Week. In the presence of newly elected Town Mayor, John Williams and Neath and Port Talbot Mayoress and dignitaries, they sung a mix of music to suit all tastes which was enthusiastically received by the audience of over 200 at St.David’s Church, Neath. Supported by guest organist, Christopher Waring Davies and Alderman Davies School Choir, it was altogether a great evening of entertainment to celebrate the Neath Festival.

The Choir, which was formed only last year, has already gained its own following and the freshness and diversity of its repertoire is one of its great assets. Its Music Director, Mark Ritzmann said after the concert, ‘the most regular comment we receive from our audiences is how much they have enjoyed the choice of music. People really love to hear a good tune, whether that is a pop song, traditional or classical piece – and in this respect we try to please not only our audiences but the choir members who enjoy learning good music. We also try not to overload our programmes – better that people leave our concerts wanting more than to have audiences looking at their watches!’

Neath Polyphonic have been invited by the Mayor to sing at the opening of the new park at Victoria Gardens and towards the end of the year they will be giving a Christmas Concert at St.David’s Church on Friday 9th December 2011. The Choir would always welcome new members to their rehearsals on Wednesday nights, 7pm at Neath Welsh School.