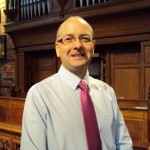 Mark Ritzmann was born in Brecon and as a young boy studied Piano and Organ. He was organist at his home church for some 10 years, and also accompanied a local choir where he gained experience from playing for their soloists.

After moving to Neath in 1988, he continued Organ studies, going on to attain the Advanced Certificate, and taking up the role of Organist and Choir Director at St.David’s Church, Neath in 1991 – a post which he has now held for over 26 years. Over that time he has become a very active member of St.David’s, and this parish, and likes to involve himself fully – not only with the Church Choir and music – but with much of the maintenance and upkeep of this very actively used building in the community. He is chairman of The Friends of St.David’s which he helped form in 2002 and which has since instigated numerous projects as well as provided a significant source of financial support to this church.

He has helped and encouraged many young choristers to gain awards including the now highly successful singer, Katherine Jenkins, a former Head Chorister at St.David’s. In 2006 he was awarded the Archbishop of Wales Certificate of Merit for services to Church music, and the following year received an award from the High Sheriff of West Glamorgan for ‘great and valuable services to the community’.

In 2010, he co-founded the Neath Polyphonic Choir which has since become a very vibrant choir in this area and has gained a large number of friends and followers. In July 2014, Mark was delighted to receive a Citizenship Award from Neath Town Council ‘in recognition for his service in the community’.

As well as his work as a Music Director,  Mark also has his own music teaching business in Neath, where he presently has around 20 pupils.- all of which he says gives him a wide opportunity to share his love of music.

Meanwhile, the Choir Committee are meeting from time to time to keep the matter under consideration.