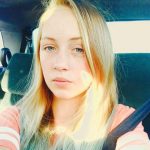 Tezni was born in Neath Port Talbot in 2003. She completed her secondary education at Ysgol Gyfun Ystalyfera, and is studying ‘A’ levels at Gorseinon College.

Tezni plays a number of instruments including the piano, harp, guitar and saxophone. She is a piano pupil with Mark Ritzmann and passed Grade 8 piano with Distinction in December 2019. In the previous year, she gained a Distinction in grade 7 harp and piano, for which she was invited to perform at the High Scorers Concert in All Saints, Oystermouth in early 2019. At the High Scorers Concert, Tezni won the Heather James Piano Prize and was awarded with a Cup and Certificate. She is also an active member of Neath Little Theatre.

Tezni completed a four day fundraising trek in the remote highlands of Iceland in August 2019 along with her mother and brother, for which Neath Polyphonic Choir donated the proceeds of their last concert to the Cystic Fibrosis Trust.

Following an audition in London in September 2019, Tezni was thrilled to be offered a place on the Harp section of the National Youth Orchestra of Great Britain 2020. In September 2018, Tezni took over as the main accompanist for Neath Polyphonic, having trained for a year as assistant accompanist. She has settled well into the role and the Choir is delighted to have her wonderful musicianship on board.